We left Winton after a brief birding visit to the Poo Ponds, as you do, and were rewarded with good views of a range of waterfowl and a few other interesting species adjacent; Purple backed Fairywren, Diamond Dove and others.

And then the long drive to the Cloncurry....

For most of the four hour drive there is not a lot of pleasing scenery to be honest with you. Plain plains that have been largely over grazed; a situation not helped by a lack of recent rain. There was not a single Kangaroo nor a live emu. Bird wise was similarly bleak; a few kites, a few Wedgies, a few Black faced Woodswallows and few of little else.

To break this journey stop number one was the Combo Waterhole.


Combo Waterhole Conservation Park gets its name from the most famous of the many waterholes found within this 49ha park. Did the jolly swagman camp by Combo Waterhole? We will probably never know, but the waterholes of this 49ha park offer a refuge for wildlife in dry times, just as they provided shady picnic spots in 1895 for stagecoach passengers and the residents of neighbouring Dagworth Station.

The Koa Aboriginal people were the first to follow the Diamantina River—a web of life that traverses the land in braided channels—pioneering paths of trade and travel. Explorers followed, then settlers brought sheep and cattle and established a stock route. Cobb and Co. teams trotted close behind. Today visitors can explore the historic stone-pitched overshots and the most readily accessible Mitchell grass downs in the area.

About 15 kilometres along the road one arrives at Kynuna,[Population - 10]  home of the Blue Healer Pub. Now this trip is a birding one not a pub crawl so we stayed clear of that.

Kynuna also boasts a roadhouse that we did stop at. It was run by an aging couple who claimed that they would retire soon. "Soon as we sell it," she said. I asked how long it had been on the market. "Just over three years now." I fear that she will die there.

Next stop enroute to Cloncurry was the Walkabout Creek Hotel at the surprisingly large village of McKinley. This iconic pub, made famous by its inclusion in the first two Crocodile Dundee films of many years ago, was closed. We had planned to take a quick break by the bar, to pay our respects for the memory of Paul Hogan inspired folk lore but it was not to be.....

A look on Trip Advisor shows mixed reviews of the Walkabout Creek Hotel. All we can say that it was closed... 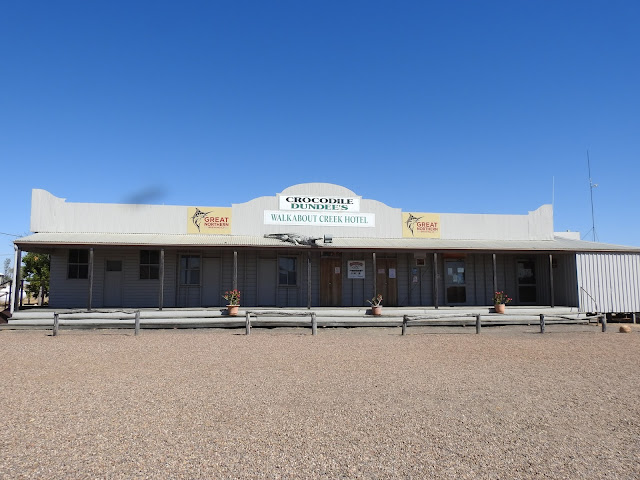