TO THE LANDS OF THE KALKADOON

Today we left Cloncurry for the Mount Isa area where we intend to stay for a few days to seek out a veriaty of the resident bird species [just for something different]. I will write about the birds in a following post as today I would like to acknowledge the traditional owners of this land and highlight some of the stupidity and racism that some of our countrymen are still guilty of. I would also like to share some of the history of this area, identified below by being in bold and italics and it has been lifted from a Queensland government website.

Mount Isa is situated on the traditional lands of the Kalkadoon people who followed patterns of hunting and gathering, fishing and trade for many thousands of years before the arrival of the first Europeans. Kalkadoon craftsmen were famous for the quality of their stone implements. Hand-crafted tools were traded by the Kalkadoon people with other Aboriginal groups across western Queensland, as far south as Birdsville.

In December 1861, William Landsborough took a relief expedition into Kalkadoon territory searching for the lost party of Burke and Wills. Landsborough made peaceful contact with a small party of Kalkadoon men, presenting them with a tin pot and two glass bottles.

After the arrival of the Native Police at Cloncurry, frontier violence in North West Queensland escalated. In 1883, Kalkadoon warriors ambushed and killed a Native Police officer called Marcus Beresford and wounded five of his Aboriginal troopers in the McKinlay Ranges. James Powell, a prominent pastoralist with family connections to the English aristocracy, was also speared by the Kalkadoon in July 1884. In retaliation, large numbers of Kalkadoon men, women and children were killed at the hands of the Native Police and armed parties of pastoralists.

A last stand was made by the Kalkadoon against an expeditionary force led by Sub-Inspector Urqhart of the Native Police in September 1884. On a rocky hill near Prospectors Creek, Kalkadoon warriors hurled missiles at the Native Police and then levelled their spears and charged Urqhart’s men, before dying in a hail of rifle fire. The area was later named Battle Mountain. A memorial to the Kalkadoon people killed at Battle Mountain was officially opened at Kajabbi by Charles Perkins and the Kalkadoon elder George Thorpe in 1984.

Between the years 1933 and 1967, there were 28 documented removals of Aboriginal people from Mount Isa. The majority of Aboriginal people removed from Mount Isa were admitted to Palm Island, with smaller numbers taken to Woorabinda and Cherbourg. Between the years 1892 and 1968, large numbers of Aboriginal removals also occurred in areas neighbouring Mount Isa, with 208 people removed from Cloncurry, 39 from Camooweal, 5 from Duchess and 4 from Dajarra.
.
Which brings me to today or at least recent history.

We stopped at a sign welcoming travellers to Kalkadoon lands. 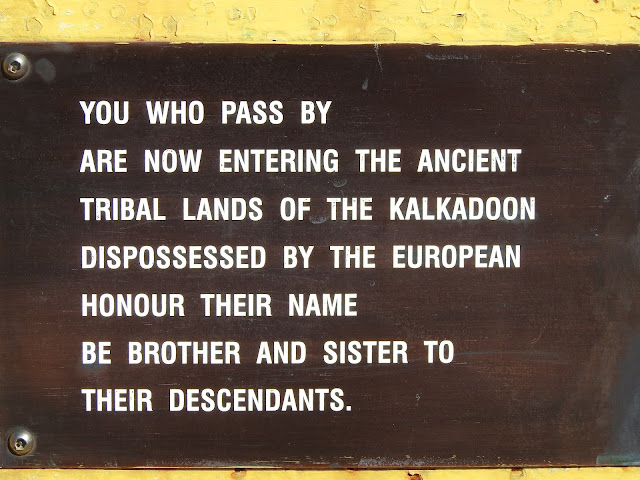 The sign post, to my mind was, honest and respectful. It was a reminder of the truth of history. It was a reminder to place value on their / our heritage. But most of all it was a reasoned call for reconciliation and peace. But some white fellas have not accepted that as this part of the monument demonstrates.
The top of the monument was a stylised Aboriginal head which had been riddled by bullets.

Why would someone gain satisfaction over such a pathetic cowardly crime?

It is a reminder, if one is needed, that people who value equality and who recognise that Indigenous Australian's culture and history are also ours to honour and preserve, need to be forever vigilant against the racist Australian.
We then went to Fountain Springs - a beautiful place and another marred by the careless actions of our countrymen.